By the beginning of the 19th century myth of Caledon did not exist in its present form. In 1812 Chalmers introduced the modern concept of the ancient forest of Caledonia in his book Caledonia. It is at this point in time that two different traditions with regard to Scottish forestry separated one of reality and one of myth. 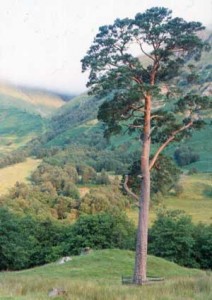 The myth proved to be a very powerful story of destruction and decline and is used for political and ideological purposes in connection with environmental issues up to the present day. But the concept of the Caledonian forest must be approached with caution because it is putting the blame of the destruction of Scotland’s native forests on outsiders while there is an abundance of evidence to suggest that locals mainly destroyed the forest.

Although the historical value of the myth of Caledon is dubious its development had certainly its merits. It makes clear that originally Scotland was considerably more wooded than at present and that its decline is almost entirely the work of human hands. This awareness calls for protection of the remnants of old woodlands and using the myth can be the decisive push to convince people to do it.

The disappeared forests of Scotland were also used to justify the creation of modern forestry plantations during the 20th century. However, strategic and economic considerations were more important incentives for the reafforestation of the Scottish uplands. During the First World War Britain was cut off from its overseas timber supplies and had to rely on its own woodlands and forests. The war reduced forest cover in Britain to less than five percent of its total land surface, the lowest ever known, and Britain’s dependence on foreign supplies of timber during times of war became a major concern. In order to rebuild stocks and create a strategic timber reserve the Forestry Act of 1919 was passed and the Forestry Commission was established.

This policy of the creation of a strategic timber reserve by the Zuckerman Committee in 1957 and it was recognised that in case of a Third World War timber reserves would not be crucial. As a result State forestry became to be justified on economic and social grounds. During the 1970s and 1980s forestry in Scotland experienced strong opposition to the creation of large conifer plantations in and in favour of stimulating the regeneration of native species such as Scots pine and oak.

The bibliography below presents a guide to the literature related to the history of the Caledonian forest and the development of Scottish forestry. The bibliography was last updated in 2016.

Dunn, Malcolm, ‘Forestry in Scotland in the Reign of Her MostGracious Majesty Queen Victoria’,Transactions of the Royal Scottish Aboricultural Society, 15 (1898) 109-129.

Fowler, John, Landscapes and Lives. The Scottish Forest through the Ages (Edinburgh: Cannongate, 2002)

Lambert, Robert, ‘Therapy of the Green Leaf’: Public Responses to the Provision of Forest and Woodland Recreation in Twentieth Century Britain’, Journal of Sustainable Tourism, Vol.16 (2008) 4, 408-427

Miller, Robert, State forestry for the axe a study of the Forestry Commission and de-nationalisation by the market (London: Institute of Economic Affairs, 1981)

Oosthoek, Jan, “Worlds Apart? The Scottish Forestry Tradition and the Development of Forestry in India”, Journal of Irish and Scottish Studies, Vol 3 (2010) issue 1, 69-82

Oosthoek, K. Jan, Conquering the Highlands. A history of the afforestation of the Scottish uplands (Canberra: ANU  Press, 2013)

Robbins, Paul and Alistair Fraser, ‘A Forest of Contradictions: Producing the Landscapes of the Scottish Highlands’, Antipode, 35, (2003) 1, 95-118

Ryle, George B., Forest Service. The First Forty-five Years of the Forestry Commission of Great Britain(New Abbot: David and Charles, 1969)

Stewart, Mairi, Voices of the Forest: A Social History of Scottish Forestry in the Twentieth Century (Edinburgh: Birlinn, 2016)

Tipping, Richard, ‘Blanket peat in the Scottish Highlands: Timing, Cause, Spread and the Myth of Evironmental Determinism’, Biodiversity and Conservation, 17 (2008) 9, 2097-2113.

Tipping, Richard, ‘The Form and Fate of Scotland’s Woodlands’, Proceedings of the Society of Antiquaries of Scotland, 124 (1994), 1-54

Tittensor, Ruth, From Peat Bog to Conifer Forest: An Oral History of Whitelee, its Community and Landscape (Chichester: Packard Publishing, 2009)

Tompkins, Steve, Forestry in Crisis: The Battle for the Hills (London: Christopher Helm, 1989)