Environmental history of the Pacific Islands: a Bibliography

The Pacific Ocean (from the Spanish Pacífico, meaning peaceful) is the world’s largest body of water and covers a third of the Earth’s surface. The dimensions of the Pacific are huge and strechtes approximately 15,500 km (9,600 mi) from the Bering Sea in the Arctic to the icy margins of Antarctica’s Ross Sea in the south, and reaches its greatest east-west width where it stretches approximately 19,800 km (12,300 mi) from Indonesia to the coast of Colombia. The Pacific contains about 25,000 islands, more than the total number in the rest of the world’s oceans combined. 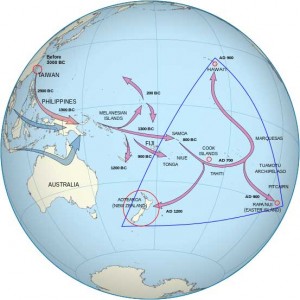 The Polynesian colonisation of the Pacific has been one of the most remarkable achievements of humanity. By the time European explorers entered the Pacific Ocean in the 16th century almost all the habitable islands had been settled for hundreds of years. Until recently, many scholars and scientists mistakenly believed that the native Pacific peoples had only a small effect on island habitats and their native animals and plants and that drastic modification of island environments is almost entirely due to more recent effects brought on by Europeans. This misinterpretation was partly a result of the cultural influence of the “noble savage” view championed by Rousseau in the eighteenth century, but was also the result of a lack of interdisciplinary research.

Recent research has shown that the Polynesians have been changing their environments in a major ways long before their first contacts with Europeans. Polynesians changed native habitats through cutting, burning, and the introduction of non-indigenous plants for agriculture. The most convincing evidence for environmental change is from bird bones of species forced to extinction found in archaeological sites. In addition, the different environments of the Pacific islands also led to a diversification of cultures. Each island developed its unique culture in response to the different environments they encountered and the resources available. One of the most intensive studied and documented Pacific cultures is the collapsed civilisation of Easter Island, but others, like the culture of Hawai’i, are at least as notable, even without statues.

The bibliography below provides an introductory reading list to the environmental history of the Pacific islands.

Bridgman, H. A., ‘Could climate change have had an influence on the Polynesian migrations?’,Palaeogeography, Palaeoclinuitology, Palaeoecology, 41(1983) 193-206.

Cassels, R., ‘The Role of Prehistoric Man in the Faunal Extinctions of New Zealand and other Pacific Islands’, in Martin, P. S. and Klein, R. G. (eds.) Quaternary Extinctions: A Prehistoric Revolution (Tucson, The University of Arizona Press, 1984).

Diamond, Jared, Ecological Collapses of Pre-industrial Societies. Can be accessed at: http://www.sscnet.ucla.edu/anthro/bec/papers/Diamond_Ecological_Collapses.PDF.

Graves, D.J., and Addison, ‘The Polynesian settlement of the Hawaiian Archipleago: integrating models and methods in archaeological interpretation’, World Archaeology, 26 (1995) 380-399.

Weisler, M. I., ‘Henderson Island Prehistory: Colonization and Extinction on a Remote Polynesian Island’,Biological Journal of the Linnaean Society, 56 (1995) 377-404