By the end of the 18th century population growth in England and other parts of Europe accelerated due to increases in agricultural production as well as technological innovation linked to the industrial revolution, but more important European expansion overseas. European powers were importing food and resources from other parts of the world that were in short supply at home and exported part of its excess population to the colonies. However, threat of dearth and famine was still a fact of life for many Europeans. In fact, population growth drove people to the margins of subsistence in an already impoverished environment. In comparison with a couple of centuries earlier, Europe had fewer forests and less wildlife. Climate conditions were unfavorable due to the Little Ice Age and the landscape showed signs of severe degradation because people pushed agriculture into marginal areas. In the cities a lack of knowledge about hygiene led to epidemic disease and, in combination with food shortages, led to a high mortality. 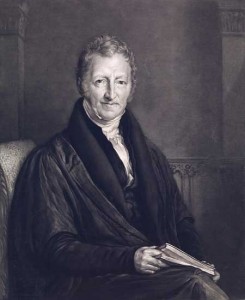 Notwithstanding all theses problems, birth rates still outstripped death. But there was another development: the age of reason, often called the Enlightenment. Thinkers and scientists across Europe developed ideas about social justice, poverty relief and sanitation. In short: these people believed in progress or the improvement of the living conditions for all.

Thomas Malthus (1766 -1834) was a political economist and Enlightenment thinker who observed the growing population with increasing concern. To explain poverty, dearth and famine he wrote a famous essay at the end of the 18th century entitled An Essay on the Principle of Population. In good Enlightenment fashion he was trying to find “natural laws”, similar to the laws of gravity that could explain the perpetuation of poverty in the world. According to Malthus population increases faster than the supply of food available for its needs. Whenever a relative gain occurs in food production over population growth, a higher rate of population increase is stimulated. Over time population growth will exceed the growth in agricultural production and will crash due to food shortages. 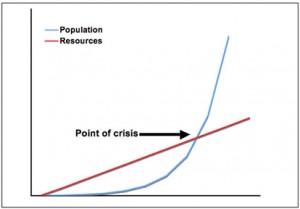 Graph sowing the principle of Malthus’
theory of population. Graph by Jan Oosthoek

The mathematical basis of this idea is the principle that the population is growing in a geometrical rate: 2, 4, 8, 16, 32 etc. The food supply on the other hand increased only in an arithmetical fashion: 2, 4, 6, 8 etc. Malthus concluded that “… the power of population is indefinitely greater than the power in the earth to produce subsistence for man”.1 In short Malthus theory predicts that if population grows much faster than food production, the growth is checked in the end by famine, disease, and war, a process that is called the Malthusian Crisis.

Malthus’s theory contradicted the optimistic belief prevailing in the early 19th century that a society’s fertility would lead to economic progress. Malthus’ theory won supporters and has sometimes been used as an argument against efforts to better the condition of the poor.

During the 20th century environmentalists used Malthus’ theory to stress that the earth cannot sustain too many people and that resources will run out unless population growth is brought under control. Famous examples of this neo-Malthusian thinking are the The Population Bomb (1968), written by Paul R. Ehrlich and the report for the Club of Rome, Limits to Growth (1972), written by a team of the Massachusetts Institute of Technology. Both works predicted disaster for humanity due to rapid population growth outstripping resource supply. Ehrlich made the grim prediction that “in the 1970s and 1980s hundreds of millions of people will starve to death”2, and that nothing could be done to avoid mass famine greater than any in history. Both books urged that radical action was needed to limit the overpopulation. Limits to Growth and The population Bomb rekindled Malthus’ theory in a 20th century context and the debate whether Malthus was wrong or correct. Up till the present day it seems that history proved Malthus, Ehrlich and other doomsayers wrong, since the mass starvations predicted for the latter quarter of the 20th century never occurred. The reasons for this are multiple but the most important are that Malthus could not have foreseen the demographic transition.3 In addition, Malthus and the authors mentioned above failed to account for improvements in technology which enabled food production to increase at rates greater than arithmetic exceeding the rates of population growth. Developments in transport and resource extraction technology also enabled access to larger amounts of resources and energy in more remote parts of the world. The jury is still out on the question if technological development will continue to increase the production of food and resources to outstrip population growth during the 21st century.

1 Malthus, Thomas Robert, An Essay on the Principle of Population as It Affects the Future Improvement of Society, with Remarks on the Speculations of Mr. Godwin, M. Condorcet, and Other Writers (London: J. Johnson, 1798), Ch I, p.17.

Macfarlane, Alan, Resources and Population: A Study of the Gurungs of Nepal (Cambridge: Cambridge University Press, 1976).

Malthus, Thomas Robert, An Essay on the Principle of Population as It Affects the Future Improvement of Society, with Remarks on the Speculations of Mr. Godwin, M. Condorcet, and Other Writers (London: J. Johnson, 1798). Accessible through the Library of Economics and Liberty.

Meadows Donella H.  and Dennis Meadows et. al., The Limits to Growth; a Report for the Club of Rome’s Project on the Predicament of Mankind (New York: Universe Books, 1972)