K.J.W. Oosthoek, “Watervervuiling in de Groninger Veenkoloniën, 1850 – 1980”, Tijdschrift voor Ecologische Geschiedenis, 2 (1997) vol. 2, 36-42.
“Water pollution in the Groninger Ven Colonies, 1850-1980”. Published in the Belgium/Dutch Journal for Environmental History.
Abstract: Twenty Years ago the Ven Colonies in Groningen regularly came into the news. The problems around wastewater were controversial matter. Indeed, already in the 19th century people were aware of the water pollution in the Peat Colonies. But then the attitudes in the period between 1850 and 1980 have contributed to the speed with which the problems were solved. Eventually social, economic and technical developments combined, leading to the solution of the problem.

K.J.W. Oosthoek & M. Roepers, “Beeldvorming van de vos door de eeuwen heen”, in: Thoen, Erik et al (eds.), Jaarboek voor Ecologische Geschiedenis 1999, Vol. 2 (Academia Press, Gent, 2001), pp. 61-78.
Summary: The fox’s Reputation Through the Ages. Published in the Dutch Yearbook for Environmental History 1999. This article explores the sources of the bad reputation of the fox by looking at classical texts and literature from antiquity to the present. It also seeks to to explain how these old perceptions are still fuelling the emotions surrounding discussions about fox hunting.

Jan Oosthoek, “Worlds Apart? The Scottish Forestry Tradition and the Development of Forestry in India”, Journal of Irish and Scottish Studies, Vol 3 (2010) issue 1, 61-74.

Jan Oosthoek, “The Dust Veil Event, 536 CE”, contributed to “What Should We Remember? A Global Poll Among Environmental Historians”, Compiled and introduced by Frank Uekötter, Global Environment, 11 (2013), pp. 209-210.

This collection of essays addresses what is arguably the most pressing and urgent issue of our time – the continuing development of the global environmental crisis and the need for new and urgent responses to them by the world community.

The contributors include social scientists, environmental historians, anthropologists, and science policy researchers, and together they give an overview of the history of the globalization of environmental crisis over the past several decades, both in terms of the science of measurement and the types of policy and public responses that have emerged to date.

For more information visit Routledge or

K. Jan Oosthoek, Conquering the Highlands: A History of the Afforestation of the Scottish uplands (Canberra: ANU Press, 2013) 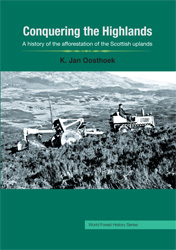 Deforestation of Scotland began millennia ago and by the early 20th century woodland cover was down to about six per cent of the total land area. A century later woodland cover had tripled. Most of the newly established forestry plantations were created on elevated land with wet peaty soils and high wind exposure, not exactly the condition in which forests naturally thrive. This book tells the story of how 20th century foresters devised ways to successfully reforest the poor Scottish uplands, land that was regarded as unplantable, to fulfil the mandate they had received from the Government and wider society to create a timber reserve. It raises the question whether the adopted forestry practice was the only viable means to create forests in the Scottish Highlands by examining debates within the forestry community about the appearance of the forests and their long- term ecological prospects. Finally, the book argues that the long held ecological convictions among foresters and pressure from environmentalists came together in the late 20th century to create more environmentally sensitive forestry.

Available as a free e-book from the ANU Press website. Print-on-demand copies can also be bought from ANU Press or

Managing northern Europe’s forests: Histories from the Age of Improvement to the Age of Ecology

This new book presents in eleven chapters a history of state forestry in the countries of northern Europe from the early modern period to the present. It covers the origins of forestry policy, fundamental policy aims, the functioning and organisations of forestry, forest management, wood supply, regulations, forest statistics, wood depletion, growing stock, forest conservation, and landscape protection. The chapters demonstrate how state building and resource use were interconnected and how transnational knowledge transfers helped to build national policies and institutions. Education, trade, warfare and technological development facilitated the transitions from forest cover decline to reforestation. The set-backs, the social conflicts, and the power struggles this process entailed receive critical examination in this volume. The study covers the following nine countries: Finland, Norway, Sweden, Denmark, Germany, Poland, Netherlands, Belgium, and Britain.

View my pofile and publications on Research Gate