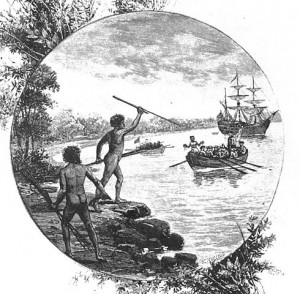 Environmental history is the study of the interaction between human societies and the environment in the past. If one applies this common definition of the discipline to Australia, the environmental history of the continent starts sometime between 50,000 and 60,000 years ago. It was then that people crossed Wallace’s Line, which passes between Bali and Lombok, west of Celebes, and east of the Philippines separating the Asian and Australian biogeographical regions. After separation of the Australian from Antarctica about 80 million years ago the continent was isolated from the rest of the world and followed its own biological evolution. This resulted in the development of a unique ecology and equally unique species. According to historian George Seddon, these uniquely Australian eco-systems ‘… had a radically new technology imposed upon it, suddenly, twice.’1 The two waves of human arrivals each brought their own set of technologies which heavily influenced the Australian ecosystems and landscape. The Aboriginals brought stone tool technology, controlled fire and hunted. The control of fire enables Aboriginal peoples to modify the landscape on a large scale and it has been suggested that the megafauna extinctions occurred shortly after the arrival of humans due to environmental change and hunting pressures.2

The second wave of human arrivals brought simultaneously an agricultural as well as an industrial revolution. The impacts of European arrival in Australia is still playing out today and has rapidly changed land cover and river systems, and has resulted in a high extinction rate over the past 200 years.

Australian environmental history is not only dominated by the two waves of human arrivals but also by the physical conditions of the continent and the way it interacts with humans. Australia is the driest continent, apart from Antarctica, with an interior that experiences extreme high temperatures. Australian soils are generally poor and thin and in combination with water shortages not well suited for intensive agriculture.

The generally dry conditions of Australia are deceptive and, as the European settlers learned the hard way, there is either too much water or too little and not very much in between. The floods that they encountered were of a scale that is unimaginable in Europe, and so are the lengths of the extreme droughts that plague the continent

Because of these extreme conditions in the Australian interior, most people live near the coast; the rim of the island continent. Australia has also one of the highest rates of urbanization in the world and the seven state capitals of Australia houses 60 per cent of its the population.3

These unique features of Australian history, ecology and population distribution has focused studies in Australian environmental history on a number of core themes. These include: the history of fire, impacts of colonization on the environment, the impact of aboriginal land use and management, the urban environment, flooding, drought and agriculture, the Great Barrier reef Aquatic environments.

This introductory bibliography presents works covering most of these themes. In addition is includes titles focusing on New Zealand environmental history. Although there are similarities between Australia and New Zealand because of their colonial past, there are also significant differences. The most important of these is the fact that New Zealand was the last major landmass to be colonized in world history: less than 1000 years ago. So the dual shock of the Maori and the European arriving is in temporal terms quite close together. As a result the environmental transformation of New Zealand has been one of the fastest in world history. This creates a whole new set of questions for environmental historians and in particular Tom Brooking and Erik Pawson have explored these.

This bibliography is far from comprehensive and if you are missing any key works that should be included please contact the editor by using the contact form on this site.

[1] Quoted in: Libby Robin, “Australia in the Collective Memory of the World”, Uekötter, Frank et al. ‘What should we remember: A global poll among environmental historians’, Global Environment: A Journal of History and Natural and Social Sciences, No. 11, 2013: 184 – 214

Brooking, Tom, and Eric Pawson,  (eds.), Seeds of empire: The environmental transformation of New Zealand (London: I. B. Tauris, 2011)

Morgan, Ruth A., Running out of water in western Australia (Perth: UWA Publishing, 2015)