Energy availability and related environmental change and the success or failure of past societies have always been closely linked.  During the early modern period the Low Countries experienced a serve wood shortage and turned to peat for fuel. By the 17th century peat extraction had become a major industry in the western and especially Northern parts of the Netherlands (see also Essay on Groningen). Entire landscapes were stripped of their peat blankets and the landscape was transformed from being a swamp into fertile agricultural land, an early example of the transformative power of fuel extraction operations. 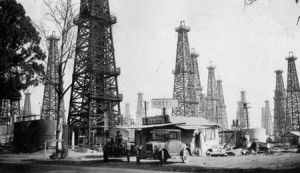 Luckily for the Dutch, peat supplies ran low when a new fuel took over: coal. The impact of coal extraction on the environment was more extreme than peat production and transformed entire landscapes. Slagheaps and smoke stacks appeared in the landscape, polluting rivers, soils and the air. By the early 20th century another fuel rose to importance: oil. The environmental effects of oil production included oil spills at sea and on land, air pollution and, locally, the dangers of explosions and fires. In addition to environmental hazards the control of energy sources has been an important theme in world history. Much diplomatic effort has been devoted to it and many wars, most recently the Gulf Wars, have been fought to control these resources.

This incomplete list of energy use and extraction in world history illustrates the importance of this topic for understanding historical developments, and how it impacts the environment. The list below provides a short reading guide to the use of energy and energy transitions in world history with a particular emphasis to environmental issues.