Just South of the Great Glen next to Loch Lochy is a valley situated that is world famous among the geography, geomorphology and geology communities in the world. It also takes a signicant place in the history of Science. The name of this valley is Glen Roy and it derives its fame from a geologic phenomenon that is known as the “Parallel Roads”. Today it is one of the lesser known Natural Nature Reserves in Scotland because of its relative isolation and poor access, but in the past it has been a battle ground between conservationists and foresters. This short essay charts its importance and why it became a source of conflict during the 1950s.

The Parallel Roads have fascinated the local population and visitors for centuries. Gaelic legend claimed these were roads created by the Celtic giant Fingal for hunting or that they were created by fairies. Local tradition held that they were build by the kings of Scotland when they resided in the castle at Inverlochy. But we know now that as the ice age drew to an end, over 10,000 years ago, the Glen was filled by a huge loch. The Parallel Roads in Glen Roy and the adjacent valleys are its former shorelines. However, it took a long time before scientists realised what the Parallel Roads really were. 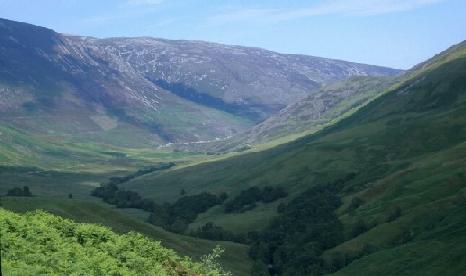 Glen Roy. The lines on both sides of the valley are the Parallel Roads
(photo: Justine Kemp).

The first published description of the Parallel Roads was by Thomas Pennant in 1771 in his book A Tour of Scotland. This work was far from scientific but during the 19th century Glen Roy played an important role in the development of geological and geomophological theories of landscape evolution.1 Initially the ‘Roads’ were believed to be lake or marine shorelines. How they were formed in an area that was now high above the sea and without signs of a closed lake bed was a mystery. Initially it was thought that the shorelines were of marine origin and formed during a period when the sea reached levels of the Parallel Roads. Among the proponent of this theory were both Charles Darwin and Charles Lyell.2 It was in particular Darwin who was impressed by the geology of Glen Roy. In 1838 he wrote to Lyell, “I wandered the mountains in All directions and examined that most extraordinary district. I think without any exceptions, not even the first volcanic island, the first elevated beach, or the passage of the Cordillera, as so interesting to me as this week. It is far the most remarkable area I ever examined. … I can assure you Glen Roy has astonished me”.3 Darwin and Lyell proved to be wrong in this matter. It was Agassiz, the pre-eminent researcher of glacial features, who propounded the existence of a former ice-dammed lake in Glen Roy after a visit there in 1840. Agassiz proved right and his idea was subsequently further developed by  Jamieson who published an article on the Ice Age origins of the Parallel Roads in Glen Roy in 1863. His conclusions settled the question of the origin of the Parallel Roads once and for all.4 Jamieson’s conclusions were further refined during the subsequent century by several generations of geomorphologists. At the present we have a detailed picture of the sequence of events that led to the formation of the Parallel Roads.

Formation of the Parallel Roads

Glen Roy was once a pro-glacial lake that formed due to the advance of the Lochaber Ice Lobe during the final cold epoch of the last Ice Age called the Loch Lomond Stadial (11,000 — 10,000 years ago). The ice blocked Glen Roy and in three major advances of the glaciers the water level was pushed up to successively 260 metres, 325 metres and 350 metres above sea level.

The level of the lake was not only controlled by the movement of the ice, but also by the altitudes of the lowest ice-free cols on the perimeters of the lake. As the ice retreated the water level also fell in three stages. The shorelines have remained on the sides of the glen like tide marks left on a bath after the water has drained away.5 On the slopes of Glen Roy these former shorelines can be clearly seen and the valley bottom is made up of lake deposits that contains important information about the final stages of the last Ice Age in Scotland. After the ice had disappeared the River Roy and its tributaries reworked the debris left by the ice and the melt water. Over time the rivers have cut channels into the glacial infill resulting in step-like terraces. From a geological point of view Glen Roy is unique in Scotland and one of the classical examples of the remains of a pro-glacial lake in Europe. But the survival of these unique geological features have not always been secure.6

During the Second World War Britain experienced a severe timber shortage and many of the British woodlands were cut down for the war effort. After the war was over the British Forestry Commission launched a new extensive planting programme to make up for the losses and to secure Britain from a timber shortage in case of a future national emergency. To make the planting programme possible the Forestry Commission bought large stretches of upland moors and heathlands in Scotland. In 1954 the Commission announced its intention to purchase the Glen Spean Estate, which lies along the east bank of the River Roy, for afforestation. This threatened an important part of the Parallel Roads by both concealing them from view and destroying them by digging drainage canals and the construction of forest roads. It was for this reason that the Nature Conservancy’s opinion was firmly against the Forestry Commission’s proposal for planting. The Conservancy regarded the Parallel Roads “of the highest scientific and historical importance”. It noted further that the roads and other geological features in the glen “thoroughly deserve preservation both as a museum piece for present and future generations”.7 Five years of negotiations elapsed before the Nature Conservancy reached a compromise with the Forestry Commission in 1959.

It was agreed that the Forestry Commission would be free to plant 578 acres in three blocks on Cranachan Farm at the east side of Glen Roy. They would also be free to plant 600 acres on the Caol Lairig section of Inverroy Estate at the opposite, west side, of Glen Roy. The rest of the Glen had to remain unplanted. To show its good will the Forestry Commission reported subsequently that instead of planting 578 acres in three blocks on Cranachan Farm they would confine planting to a single block of 330 acres on the north side Glas Dhoire. The remainder of the farm had to be sold and was therefore not afforested.8 On a modern map it can be observed that the Forestry Commission planted all three blocks as it was initially intended. But for the remainder the Commission kept its promise and planted only in the areas as was negotiated in 1959. In the case of Glen Roy the Nature Conservancy had successfully influenced the opinion of the Forestry Commission and its planting programme. However, this would remain only an isolated incident until the 1980s when the successor organisation of the Nature Conservation, the Nature Conservancy Council, published a paper on forestry.9 It is thanks to the Nature Conservancy that at the present day a large part of Glen Roy is a National Nature Reserve to protect the ‘Parallel Roads’ and other related geophysical features.

1The search for a theory of the formation of the Parallel Roads is an instructive case study in the history and philosophy of Science and the development of scientific ideas. See for a detailed discussion Rudwick, 1974.

3Darwin, C. R. (1839), “Observations on the parallel roads of Glen Roy, and of other parts of Lochaber in Scotland, with an attempt to prove that they are of marine origin”, Philosophical Transactions of the Royal Society 129: 39-81. See: Darwin Online for full text.