This paper on the perceptions of Scottish forestry was presented at a research seminar of the Department of History of the University of Stirling on 24 February 1999. The theme of this seminar was “Environmental History: Interdisciplinarity and Where this Leaves History”.

In the next 20 minutes I will take you on a walk through the forest. The forest we visit is a modern one. Walking through it we notice a boring monotony of single tree species densely planted in rows and organised in dark green patches that extent for miles in all directions. Disgusted of this monotony we leave the forest and decide to write a letter to the Forestry Commission to complain about their landscape wrecking practice of forestry. In doing this we are not alone.

Among many people the image of modern forestry is not a very positive one. On the Internet Homepage of the action group Reforesting Scotland we can read that the new Scottish forests “would not resemble the dark regimented plantations which many of us picture when we think of present day forestry”.1 These ‘dark regimented plantations’ are the physical results of a forest policy that was characterised by expansion of the forests, the increase of timber production and the attainment of maximum wood production and hence financial income from the forest. (Until 1957 the main aim was to establish a strategic timber reserve in the case of war. Afterwards the expansion was meant to increase domestic timber production). It is said that this policy resulted in a single minded forestry practice that was dominated by the silvicultural system of even-aged, monocultural, high forest plantations, managed by a clear felling system.

The silvicultural system of high forestry was imported from Germany in the decades before the First World War and remained the dominating forestry philosophy in Britain until the 1980s. The German silvicultural system seemed to fit perfectly with the objectives of British forestry.2 In this context the World Wildlife Fund stated in a recent report on Scottish forestry that “during the 20th century under the aegis of the Forestry Commission, the model of continental plantation forestry emerged as the dominant forestry practice in Scotland”.3 Why did continental forestry become the dominant practice? And is it really so single minded aimed at timber production without regards for the environment? The practice of even-aged, monocultural, high forest plantations seems a very rational system that is not creating a forest but a ‘timber factory’. 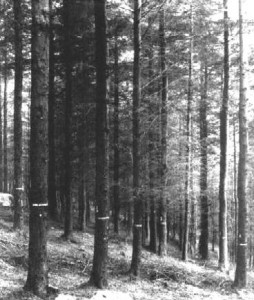 This mechanistic approach reduces the forester to someone with no interest in nature conservation or aesthetic values of forests. He (foresters were, and still are, mostly men) is regarded as the man who plant trees and the man with the axe.

But this judgement seems unfair because in recent decades people tend to overlook the fact that we owe a lot to past foresters with regard to nature conservation. They were among the first who recognised the importance of conservation and protection of forests and the life in it. The problem is that they did not use the same environmental language as we do. This is one of the reasons that these ideas are often not recognised as environmentally sensitive by modern observers. To be able to recognise environmental sensitive ideas in the past we must understand the intellectual framework in which foresters thought.

A dominant source that influenced forestry in Scotland, and Great Britain in general can be found in the colonial context. From the mid 18th century ideas about deforestation, climatic change and desiccation developed. Botanists and other scientists in the service of the East Indian Company and later the Colonial Governments noticed the impact of Imperialism on the landscapes of many tropical islands and India. The most important impact they observed was the disappearance of forest vegetation covers. They thought that deforestation influenced local and world-wide climates. It was feared that the disappearance of forest covers contributed to a temperature rise, a drying up of the world’s land surface and a less humid atmosphere. It was believed that this was leading to desertification and degradation of soils. It was also thought that deforestation contributed to the extinction of species.

But there was also another fear that the treatment of forests was not sustainable. In 1874, in an address to the Royal Scottish Arboricultural Society, Hugh Cleghorn, the first Conservator of Forests in Madras, India, said that “the government in India began to be serious embarrassed by the scarcity of timber; its attention was directed to the management of the indigenous forests”.4 There was a fear of a serious timber shortage in the near future. This resulted in the feeling that something had to be done to preserve the forests. This paved the way for the establishment of the Indian Forestry Service in 1864, more than 50 years before a state forestry agency came into being in Britain.

What is the connection of colonial forestry with Scotland?

The colonial forestry tradition was introduced to Scotland by botanists and foresters who returned home after their service in the colonies. In Scotland the ideas of these people were welcomed because landowners were looking for new forestry methods to deal with the looming timber shortage on the British Isles and to increase this potential profit from the forests. The colonial foresters propagated the establishment of formal forestry education and state forestry. Forestry education developed slowly but by 1900 there were forestry courses at the University of Edinburgh and at some of the Scottish agricultural colleges. These schools were disseminators of the ideas of the colonial forestry tradition and influenced several generations of foresters.

When the Forestry Commission was established in 1919 it adopted the forestry method of high forestry managed by a clear felling system that had first developed in Germany and was afterwards seen as ‘the genuine German forestry practice’. At the present day it is regarded as an environmental unfriendly practice. French forestry on the other hand is often heralded as a more environmental sensitive forestry tradition concerned with mixed stands, natural regeneration and anti-desiccation forestry.

However, this rigid description of the French and German forestry schools obscures the fact that the practice of high forestry is only part of the German tradition. In 1877, at a meeting of the Royal Scottish Arboricultural Society, the Scottish botanist John Croumbie Brown said that the aim of German forestry practice was “to secure simultaneously … a sustained production of wood and timber, a progressive amelioration of the state of the forests and a natural reproduction of these by self-sown seed”.5 Further aims were to counter the negative effects of erosion, desiccation and climate change. The aim of German forestry was thus the same as French forestry but the practice was a little different. It is in fact better to speak of the Continental forestry tradition than of two separate traditions. To picture the French tradition as environmentally sensitive and the German tradition as single minded economic and environmentally insensitive is more based on clichés than on facts. The reason that the Forestry Commission adopted a practice of high forestry is due to the fact that this type of forest is easiest to establish and manage. Although many foresters in the inter-war period thought that forestry along ecological lines was a better practice, the practice of high forestry was not entirely alien to their ideas of environmentally sensitive forestry.

During the inter-war period forestry in Scotland was based on the objective of general human welfare rather than financial gain. Emphasis was placed on the indirect benefits such as preventing erosion, regulation of flow patterns, amenity and the biological value of forests and, last but not least, rural employment. But there was also a fear of devastation of forests on a worldwide scale. Forests had to be conserved to prevent the negative consequences of deforestation and timber shortages. Therefore the forests had to be managed in a sustainable way, based on ecological bases. This was a legacy of the colonial forestry tradition.

Ideas of environmentally sensitive forestry, or, as it was known in the inter-war years, forestry on natural lines, were common throughout the 1930s and after the war. The best known representative of this forestry ethic was Mark Anderson. Anderson’s outlook to forests was what we call holistic nowadays. He described in a radio talk forests as “extremely complex associations of organisms, living in a delicate balanced harmony, amongst which the trees are merely the most conspicuous components”.6 He saw the forests as “living communities”. Among present day environmentalists Anderson is heralded as a prophet crying in the wilderness and who was far ahead of his times.

However, Anderson’s ideas were not as unique for the period during which he was writing about it. Anderson was a man of his time and shared his ideas of forestry on an ecological basis with many other foresters. For example: H. L. Edlin, publication officer of the Forestry Commission in the post-war years, and W. H. Rowe, a forester from Oxford, both wrote about forestry on an ecological basis. In 1947 Rowe wrote in his book Our Forests that forests are “a living community throbbing with life”. He continued: “For here, indeed, is a colony of individuals – plants, trees and animals, co-existing in a communal life”.7The fact that Anderson is hardly recognised as a man of his times at the present is due to the rational system of forestry economics that was introduced in the 1960s.

In 1957 the so called ‘Zuckerman Report’ was published. This report, reviewing forestry and agriculture on marginal lands, concluded that the objectives and policy of the Forestry Commission were out of date. Strategic needs became less important with the advent of nuclear warfare. The next war was expected to be short and the principle of ‘three years self-sufficiency’ was no longer needed. The Report concluded that foresters should actively search for uses for their wood products.8 Soon, forestry found a new aim in growing trees for an expanding domestic wood processing industry such as paper mills and woodchipboard factories. Ryle (Forstry Commissioner in the 1960s) wrote in an article in Scottish Forestry that “mass production in the factory needs to be fed by raw materials mass produced in the forests”.9 The emergence of a wood processing industry turned forestry into a ‘forest industry’ with the aim to answer the demands of their customers. The silvicultural system that was thought to answer the needs of the market was that of short rotations and included the planting on fertile soils, heavy thinning, and the use of fertilisers and monocultures of fast growing species.

This development had such a profound environmental impact on the landscape that it influenced the perception of a whole generation of environmental campaigners. It is working like a lens that is distorting our view of the past. This obscures the roots of environmentally sensitive forestry. The impression, as said before, exists that a forester is only the man with the axe, planting dense regimented coniferous woods and who is only interested in profit. This is not only the picture of the modern forester, but of the forester throughout history.

1 Reforesting Scotland, http://www.gn.apc.org/reforestingscotland/info/main.html, December 1998. Reforesting Scotland is a non-profit organisation. Its aims are: raise awareness and promote understanding of the deforestation of Scotland and its implications in ecological, social and economic terms; Develop community participation in ecological restoration, forest management and integrated land use; Promote sustainable forest culture and economy in a well-forested land. (accessed Feb. 20 1999)