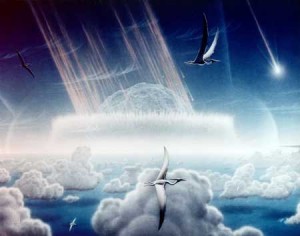 There are few events that humans around the globe owe more to than the natural disaster that occurred in Chicxulub on Mexico’s Yucatán Island some 65 million years ago. At that time a huge asteroid hit the earth, releasing over a billion times more explosive energy than the atomic bombs that hit Hiroshima and Nagasaki.

This impact finished off the domination of the dinosaurs and opened new pathways in the evolutionary history of the earth and made room for our primate ancestors. There are no traces in the collective memory of humanity of this event before the late 20th century because when it happened no one was around to see it. However, it left a memory in the crust of the earth in the form of a small layer of irridum. The cataclysm helped humans to evolve and multiply and dominate the surface of the planet. The site in Mexico reminds us that big history and environmental history are intertwined. 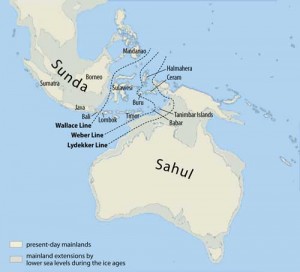 Perhaps one of the crucial moments in the Big History of the World was the crossing of Wallace’s Line by modern humans some 50-60,000 years ago. Wallace’s Line is boundary caused by impassable deep sea trenches that separates the Asian and Australian zoogeographical regions and passes between Bali and Lombok, west of Celebes, and east of the Philippines. This resulted in the development of spectacularly different species in Australia and New Guinea because it was isolated from the rest of the world.

The extraordinary indigenous history of Australia and New Guinea is still being discovered. This ancient continent has thus captured an exceptional history of of change and adaptation of people and environments. Its biodiversity and environmental catastrophes are part of the collective history of people as well as plants and animals.

The shift from hunter gathering to agriculture is probably the most important ecological event in the history of humanity. The agricultural revolution is a global event because it happened in parallel developments in many parts of the world, although at slightly different times. Core regions of the development of agriculture were the Middle East (10,000 BC), China (9,000 BC), New Guinea (8,000-6,000 BC), and South and Central America (4,000 BC). Agriculture revolutionized the way people interacted with other species, which revolutionized the way people interacted with each other as well. It made complex urban societies and states possible and everything historians study has been a byproduct of this.

The emergence of agriculture had also major environmental impacts of which the most important has been deforestation in order to make space for crops and livestock. There is also strong evidence that land clearing for agriculture and the development of rice paddies released significant amounts of greenhouse gasses (methane and CO2) and caused the first instance of anthropogenic warming of the planet.

The last Ice age ended when the ice sheets finally retreated from Scandinavia and the glaciers in Scotland disappeared. People, animals and plants invaded the appearing land after the ice had disappeared. Part of the North Sea is still dry.

8,000 - 7,000 BC, Age of the Hunter Gatherers. The European environment was transformed: the boreal forests (coniferous forests) were pushed back to Scandinavia, tundra and steppe were all but removed from the scene and the dominant vegetation type was now mixed deciduous forest covering over 80% of the land bordering the North Sea. Humans followed vegetation and recolonised northern Europe. 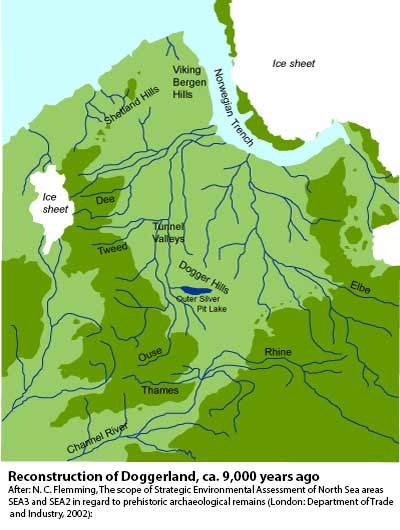 One of the most dramatic changes after the end of the last ice age was the changing position of sea levels. Until about 8,000 years ago most of the North Sea basin, and other continental shelves around the globe, was still dry land. For long periods it was an ice free plain dissected by rivers, such as the extended Rhine, with tundra or cold resistant vegetation on which reindeer, mammoth and other large animals roamed. Almost certainly human hunters were attracted and archaeologists have found tools and the remains of underwater settlements in this dry North Sea area has been called ’Doggerland.’ There is some speculation that hunters living in these lands colonised Britain and surrounding areas after the ice disappeared and the North Sea basin flooded.

The rise in sea levels was rapid. On some sites it was up to 30 centimetres per year - equivalent to 30 metres or about 100 feet in 100 years! The flooding of the North Sea basin continued and, about 8,000 years ago, the land bridge which connected Britain to the main land was severed. This prevented many tree and plans species to invade Britain and explains, for example, why it has only two species of conifer: Scots Pine and juniper (the status of yew is contested).

Mesolithic Europeans altered the landscape through fire more thoroughly than their predecessors. By doing so they created a more predictable environment for themselves.

Burning grasses helped rejuvenate their environments over a period of five to six years, attracting game, especially if open areas were maintained near water sources. It probably through the use of fire and other land management techniques that created large open areas which is probably most important environmental legacy of the Mesolithic peoples.

The Europeans learned to manipulate their environments and created a mosaic of woodlands and open land that they so favoured for food gathering and hunting. Manipulation could be extreme: it was Mesolithic hunter-gatherers who first deforested the western Isles of Scotland. By 3000 years ago there was no tree left on these isles.

6,000 - 2,500 BC: Holocene Climate Optimum. Sea level reached a slightly higher level than today coinciding with the warmest period of the past 10,000 years with temperatures about 2 degrees celsius higher than today.

Roman expansion was partly driven by resource shortages and environmental degradation. The Mediterranean basin was largely deforested by 2000 years ago.

Grain production also drove the expansion due to the Roman population in Italy. Driven by the need to feed them Rome needed to conquer more territory that could produce grain. This drove the wars with Carthage in North Africa.  After it was conquered by the Romans North Africa was stripped of its trees and became the breadbasket of Rome.

That was not enough because Rome gradually ran out of metals such as gold, iron, led and silver and had to turn elsewhere: Northern Europe.

Northern Europe was the periphery on which the core of the Roman Empire relied for raw materials.

The direct environmental consequences of the Roman Empire in Northern Europe can be best understood by examining the following activities: Road Building, agriculture, logging, and mining and urbanisation.

Roads. One of the most visible changes in the landscape must have been the construction of Roman roads. Over time quite a dense network of characteristically straight roads was build and cut the landscape up in a patchwork. Many of these Roman roads are still in use (following at least the course of the roads).

Agriculture. During the Roman period a range of new crops were introduced in northwest Europe and these included cabbage, parsnip and carrots as well as spelt. The new crops complemented the existing crops of wheat, barley, oats, tic beans, vetch, peas and rye.

The introduction of better iron ploughs that ploughed deeper and tougher soil made the cultivation of more land possible. The two handed scythes and harvesitng machines made the cutting of the cereal crops faster and easier. Better quality axes meant woodland could be cleared faster and so turned into farmland.

The livestock was also improved and by careful breeding and better supplies of winter fodder, the quality of the breeds of cows, sheep and pigs made for better quality diary and meat produce.

Logging. Wood shortage was so bad that by the first century CE ceramics factories were relocated to Gaul due of a lack of fire wood in the Roman heartland. Increasingly the Romans turned to the forests of the north in Germany for timber, for example in the Vosges Mountains.

Urban Settlements. Urban settlements increased in number and size in Northern and western Europe and were a new element in Britain when the Romans arrived. Towns sprang up all over the country.

Between 536 and 551 AD, tree ring growth was very low throughout Eurasia and many other parts of the world. Contemporary writers in southern Europe described what modern climate scientists call a “dust veil event” that sharply reduced the amount of solar radiation reaching the earth’s surface. It has recently become clear that we are dealing with one or more huge volcanic eruptions in the tropics. These eruptions put enough dust into the atmosphere to affect the earth’s climate for years. The resulting depressed temperatures and disrupted weather patterns reduced biological productivity, including that of food crops, resulting in famine and social disruption around the globe during the sixth century. This event resulted in the transformation of societies around the globe including in China, the Mediterranean, Scandinavia, and the American Southwest. It signaled the dawn of the Middle Ages in Eurasia. Because of its scale and importance, this event should be part of humanity’s collective environmental memory. The AD 536 event is an important test case for comparing the environmental resilience of different societies.