Onset of the Little Ice Age

Environmental upheavals linked to sever climate variability characterised the period from 1300 to 1400.  All tree ring series in northern Europe show a decline in growth rates, indicating an adverse climatic change. This marked the transition from a “Medieval Warm Period” to the “Little Ice Age” when temperatures were on average 1.5 degrees Celsius lower than before and with greater seasonal variation. The cooling trend associated with the Little Ice Age progressively moved from north-west to south-east across Europe, with the Vikings in the far North experiencing the clooing first, British Isles experiencing the effects from the 1290s and the Mediterranean after 1320.

Written records from the 14th century provide accounts of severe weather in the period from 1314 to 1317, which led in turn to crop failure and famine. This episode of failed harvests and its consequences is known as “The Great Famine”. Notwithstanding these ecological calamities, the population of northern Europe was at an all time high by the second quarter of the 14th century. However, the arrival of the Black Death, in Europe in 1347 pushed the European population into a century-long demographic decline and caused long-term changes in economy and society.

Germs and microbes are part of our environment. In fact, these creatures can be regarded as the most successful living things on the planet. Our invisible environment of microbes has also shaped events in world history in many ways. Nowhere was this more evident and visible ultimately, in the Black Death that affected, and infected, Eurasia during the 14th century. The Black Death spread from central Asia along trade routes and reached southern Europe in 1347. It swept quickly through the continent and reached northern Scandinavia and Iceland in 1350.  Few areas escaped and by late 1350 between 30 and 40% of the European population had perished.

But what catapulted the Black Death on the world stage? Recently it has been suggested that a climatic event similar to the 536 dust veil event is responsible. Based on comparing the chronologies of prices, wages, grain harvests and the corresponding chronologies of growing conditions and climactic variations, taking into consideration dendrochronology, the Greenland ice cores it has emerged that the episodes of the Black Death coincide with depressed temperatures. Find out more in this video lecture by Professor Bruce Campbell of Queens University Belfast. 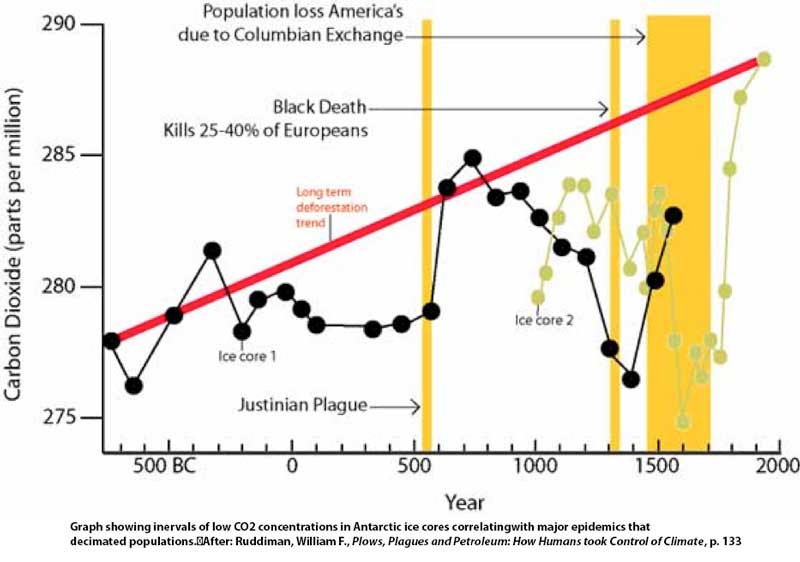 The dramatic decline of the European population caused by the Black Death coincided with a decline in global temperature. Coincidence? The climate was already getting colder because the northern hemisphere was heading for the Little Ice Age. At the same time agricultural land was taken out of production in Europe because of the 25-40% decline of the European population (depending on region). This means ploughing of less ground, which releases greenhouse gasses (Methane and carbonates) and forest clearance was reversed. More trees and scrubs mean that more carbon (CO2) was taken out of the atmosphere and stored in biomass. The abandoned farmland acted as a significant carbon sink because trees store carbon taken from the CO2 in the air.

From about 1350 CO2 levels in the atmosphere appear to fall following the Black Death. However, a long term declining trend may have already started before the Black Death. We know that the first two decades of the 14th century were wetter, windier and climatically more unstable than before. The declining trend also continued after the recovery of agriculture after 1440. The reforestation that followed the Black Death and the resulting decrease of CO2 in the atmosphere pronounced a natural cooling trend that was already underway: the beginning of the Little Ice Age (LIA). This does not mean the LIA was triggered by the Black Death but the latter possibly contributed to it, although temporarily.

Biological exchanges and invasions are important drivers in history. Over the course of the Earth’s history there have been many biological invasions. Think for example of the species that took advantage of land bridges during ice ages, when sea levels were lower, to expand into new areas where they did not live before. These processes were relatively slow and only the most mobile species were able to migrate over long distances. Geographic barriers, such as oceans and mountain chains, inhibited migrations of most species and divided the earth into distinct biogeographical provinces. But with the development of long distance navigation in the 15th century people started to transport species from one continent to another on a scale and with a speed that the world had never experienced before.

This process of the exchange of biota is now familiar to many historians, as the Columbian Exchange, thanks to the work of Alfred Crosby. Crosby used the term to describe the exchange of agricultural goods and disease between the Eastern and Western Hemispheres that has occurred since 1492. To America, Europeans introduced crops like wheat, rice, bananas, sugar, and grapes. Europeans also brought a number of domesticated animals to the New World, including horses, cattle, pigs and sheep. The Eurasian species thrived in the America’s because their animals and plans encountered less competitions or it was even absent, altering eco-systems forever but also aiding the success of Europeans in the New World, a phenomenon dubbed “ecological imperialism” by Crosby.

However, the exchange process was not a one-way street. Africa and Eurasia acquired some very useful crops from the Americas, most notably potatoes and maize. The new food crops fuelled population growth in Europe, Africa and China.

One of the most dramatic consequences of the Columbian Exchange was the transportation of microbes to the America's that caused pandemics among the local populations. These populations had never been exposed to diseases such as small pox or measles. As a result is has been estimated that between 75 to 90 per cent of the indigenous populations of the America's perished. 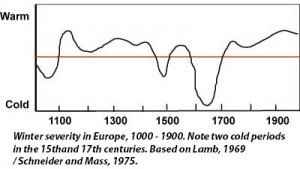 The Little Ice Age is a period between about 1300 and 1870 during which Europe and North America were subjected to much colder winters than during the 20th century. The period can be divided in two phases, the first beginning around 1300 and continuing until the late 1400s. There was a slightly warmer period in the 1500s, after which the climate deteriorated substantially. The period between 1600 and 1800 marks the height of the Little Ice Age.

During the height of the Little Ice Age, there are indications that average winter temperatures in Europe and North America were as much as 2°C lower than at present. The Baltic Sea froze over, as did most of the rivers in Europe. Winters were bitterly cold and prolonged, reducing the growing season by several weeks. These conditions led to widespread crop failure, famine, and in some regions population decline.

At the same time the 17th and 18th centuries were characterised by the expansion of European trade and the formation of European sea born Empires. This was directly linked to advances in technology harnessing more of nature's power and towards the end of the period fossil-fuelled power. These two hundred years also saw the specialisation of agricultural regions, which produced specific products for local and international markets.

For more details read the article The Little Ice Age. 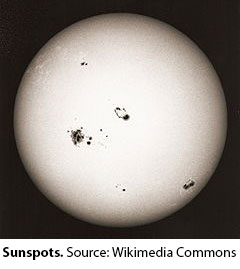 The exact cause of the Little Ice Age is unknown, but many people have pointed at the coincidence in low sunspot activity and the timing of the Little Ice. This so called Maunder Minimum coincided with the coldest part of the Little Ice Age, in particular during the period roughly from 1645 to 1715, when sunspots were a rare occurrence, as noted by solar observers such as Cassini and Flamsteed. A minimum in sunspots, indicates an much less active and possibly colder sun and consequently less energy output to warm the earth.

The Maunder Minimum is named after astronomer E.W. Maunder who discovered the absence of sunspots during that period. Recently published data suggests that the Sun expanded during the Maunder Minimum and its rotation slowed. A larger and slower Sun, it is speculated, might also mean a cooler Sun that provides less heat to Earth. (Just why the Sun expands and contracts is not entirely understood).

Air pollution is not a new phenomenon. By the mid-1600s, London’s air had attracted the attention of one of the greatest minds of the time, John Evelyn, and advocate for forest regeneration. He published a book in 1661 entitled Fumifugium or the Inconvenience of the Aer, and Smoake of London Dissipated. The pamphlet is a call to clean up the air of the city of London. It described the effects of air pollution caused by coal burning on the on the population of London:

[In London] her Inhabitants breathe nothing but an impure and thick Mist, accompanied by a fuliginous and filthy vapour, which renders them obnoxious to a thousand inconveniences, corrupting the Lungs, and disordering the entire habit of their Bodies; so that Catharrs, Phthisicks, Coughs and Consumptions, rage more in this one City, than the whole Earth besides.

Evelyn suggested that burning wood instead of coal would be less harmful to the lungs and recommends relocating some of London’s more polluting industries outside the city, in particular lime-burning and brewing.