Romanticism was an intellectual and artistic movement that originated in the second half of the 18th century. It was a reactionary response against the scientific rationalisation of nature during the Enlightenment, commonly expressed in literature, music, painting and drama. But it was not simply a response to the rationalism of the Enlightenment but also a reaction against the material changes in society, which accompanied the emerging and expanding industrial capitalism in the late eighteenth century. In this transition production became centralised in the city. The factory system of mass production was centred on processes that used and controlled natural forces such as water and wind, but also increased power by increasingly using fossil fuels. These processes, combined with the profit motive, “degraded and despoiled”, as some romantics saw it, the environment (although they would not have used the term). Cities expanded to unprecedented sizes, and grew into into centres of pollution, poverty and deprivation. They began to symbolise the failure of laissez faire liberalism’s philosophy that permitting people to follow their self-interest would lead to a perfect society. Population movement from the land, and rational search for economically efficient production methods (involving division of labour, timekeeping and mechanisation) led, according to the Romantic Movement, to spiritual alienation of the masses from the land and nature. As Marx and Engels perceived it, they became units of production: cogs in an impersonal productive machine. People and nature were objectified, and reduced to commodity status.

This was regarded as undesirable and leading to the degradation of the humans. According to the romantics, the solution was “back to nature” because nature was seen as pure and a spiritual source of renewal. It was also a way out of the fumes of the growing industrial centres for the new industrial rich. Inspired by the works of romantic authors and poets such as Wordsworth, Keats and Shelly, they hopped on the newly developed railways and travelled to the Lake District. This led in the end to an appreciation of the landscape, described in terms as the “Sublime” and also “Delight” (in the landscape). Spoliation of a pure natural landscape was regarded as undesirable and destructive. These ideas are still with us and led the way for modern day conservation and environmentalism as well as outdoor recreation and appreciation for natural and historical heritage. 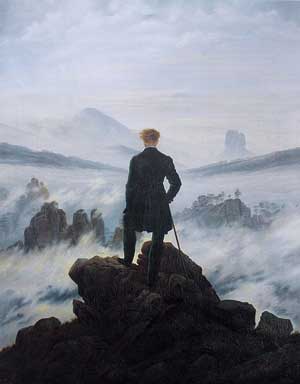 Caspar David Friedrich, Wanderer above a Sea of Fog (c. 1818)

This image is probably one of the most famous romantic paintings. It illustrates the sublime, so popular with Romantic artists and associated with emotions of greatness and founded on awe and terror. At the same time it shows the glories of nature and landscape that open up during long walks in the hills and mountains. This theme features heavily in English Romantic literature and poetry.

But the painting is also the very icon of the alienation from nature experience by urban dwellers of industrial cities. It depicts the wanderer as a stranger in nature, but at the same time as a conqueror of nature. The contradictions in this painting show the complexity of Romantic art.