Podcast 53: Desire for the Wild – Wild Desires? The trouble with rewilding

September 27, 2013 / K. Jan Oosthoek / Comments Off on Podcast 53: Desire for the Wild – Wild Desires? The trouble with rewilding 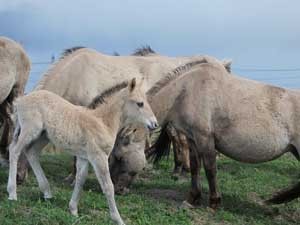 A foal in the Konik pony herd at Wicken Fen.
Photo: Dolly Jørgensen.

It is undeniable that human influence is now felt in almost every ecosystem, region and ocean of the world. As a result wilderness or wild nature is becoming less abundant. In response to this less wild world, landscape and ecosystem restorations are undertaken all over the globe. One of these places is the wetland area of Wicken Fen in Cambridgeshire, England, where the National Trust is attempting a landscape scale restoration. This programme is not just about restoring but also “rewilding” the landscape. A big part of the Wicken Fen restoration involves the introduction of large grazers: Konik ponies and Highland cattle.

In April a workshop was held at Wicken Fen entitled Desire for the Wild – Wild Desires? Re-wilding in a world of social, environmental and climate change. This workshop considered what “wild” and “rewilding” of nature means and what history can contribute to efforts to rewild and restore landscapes and ecosystems. 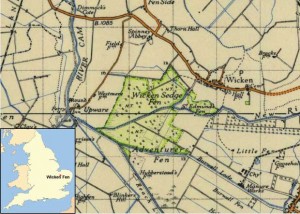 The guest on this podcast is is Dolly Jørgensen, a historian of Science and the Environment based at Umeå University in Sweden. Dolly presented a paper at the workshop on how rewilding has been an argument meaning different things to different academic sub-groups, all with a different historical notion of ‘when was wild’. Dolly deconstructs the different meanings of rewilding, and also follows the trail to find wildness all around us.

This podcast is the first of two episodes exploring the Desire for the Wild – Wild Desires? workshop.

Paul Warde, The Anthropocene: finding ourselves back in the wilderness. Reflections on the workshop on Re-wilding and Wild Desires at Wicken, 18-19 April 2013

Carl Elliot Smith, Rewilding: should we introduce lions and Komodo dragons to Australia?, ABC RN Radio, Wednesday 3 July, 2013. Listen also to Future Tense to find out more about the strand of conservation theory known as rewilding.

George Monbiot, My manifesto for rewilding the world, The Guardian, 28 May, 2013.

Also listen to episodes 38 and 40 of Exploring Environmental History Podcast. Both explore the Wicken Fen Vision and the history of the Fens of Cambridgeshire.

The Places that Speak to Us Project and the production of this podcast was funded by the AHRC Landscape & Environment Programme.

This podcast was simultaneously published on the Histories of Environmental Change website.

Podcast 52: Scientific and environmental diplomacy and the Antarctic