Contested climate: the debate on the climatic influence of forests – Postscript

May 26, 2016 / K. Jan Oosthoek / Comments Off on Contested climate: the debate on the climatic influence of forests – Postscript

Within the general context of ideas about climate change and variability, the focus of the research described in the interview on episodes 71 and 72 of Exploring Environmental History, was confined to the contested debate about the climatic influence of forests during the period before the late 1950s (a preliminary assessment is shown in Legg 2014). That end date was chosen primarily because of the discontinuity thereafter in easily accessible digitised mass newspaper sources as a forum for public opinion. Nevertheless, some significant progress in scientific research on the climatic influence of forests has been made in recent years, and is worth noting here. These new scientific theories developed particularly from the late-2000s offer a greater sense of closure to the narrative – or perhaps more precisely, they mark the beginning of a new phase in the debate. A few comments are also offered below linking the study’s findings to the current issue of scientific consensus on the threat of the Enhanced Greenhouse Effect (‘Global Warming’) as well as a brief consideration of other public debates about perceived threats to climate in the period from the end of the Second World War.

Recent Theories on the Climatic-Influence of Forests

For half a century after the late-1920s the idea that forests brought rain was maintained by a few zealous individuals (mainly professional foresters and conservationists) increasingly marginalised by mainstream science and governments. From the late 1950s and through the 1960s, growing scientific interest was shown in forest hydrology, but the focus remained largely on the effects in forested areas of precipitation after it had fallen. From the mid-1970s there was a sharp increase in public concern and scientific publication on the varied effects, at different scales, of tropical deforestation. Along with the impact on biodiversity, climatic change became a growing concern, with the geographic focus squarely on the Amazon basin. Complementing the concerns of biologists and increasingly globally-organised environmentalist groups, meteorologists turned their attention to such issues as rainfall recycling (to clarify the much-contested contribution of local versus regional sources of precipitation), energy and moisture fluxes, and biometeorology. Specialist journals in bio-meteorology and hydro-meteorology were established. During the 1980s and early 1990s climatologists’ attention turned increasingly to the regional and global impact of tropical convection systems (incorporating not only the Amazon, but also the west Pacific especially in relation to the Walker Circulation and its episodic impact in that region on El Nino and La Nina events, and the Congo Basin – the latter especially from the late 2000s). Many of these studies helped determine the data later applied to increasingly sophisticated, computer-based, global climate models. However, methodological issues such as up-scaling from local energy and moisture fluxes, and the extent to which baseline calculation should account for the extent of forest modification, remained problematic even when the contribution of particular contested climatic processes and sources could be ascertained. For example, by the early 1990s the contribution through evapotranspiration of Amazonian rain forests to rainfall was being confidently asserted – but claims for both the magnitude (ranging between 25 and 88 per cent) and its significance varied widely. And as it had for centuries the precise nature of how forests ‘attracted rain’ was still largely unknown. Theoretical breakthroughs were claimed, however, in the late 2000s particularly in relation to discoveries of the widespread presence above tropical forest canopies of biogenic nuclei such as fungal spores significant for condensation and ultimately precipitation (see work by Poschl et al. 2010).  Between 2007 and 2016 more than a dozen scientific papers confirmed the influence of vegetation on regional rainfall patterns, albeit mostly in tropical forests – but the work of Makarieva, Goshkov and Li (particularly from 2006 on forests as ‘biotic pumps’) was preeminent in what some of their promoters saw as a ‘transformative theory’. Moreover, in claims reminiscent of the language of the strongest proponents of the idea of the climatic influence of forests in the late Nineteenth century, the new theory that tropical forests could establish and maintain their own rainfall regime was seen as both validating traditional beliefs of ‘local people’ that forests brought rain, and providing ‘a compelling new motivation for forest conservation’ (Sheil and Murdiyarso 2009). These works on bio-regulation have also been considered for some small parts of Siberia and New Guinea, but much research remains on other forest types and localities even if the basic hypothesis is accepted.

Fears of Nuclear Explosions as a Cause of Climate Change 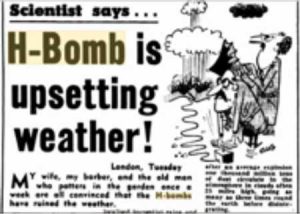 More than 500 atmospheric explosions of nuclear devices were made between 1945 and 1980, with a substantial reduction in atmospheric tests from 1963 due to bans imposed largely because of concerns about the health effects of radioactive fallout. Between 1945 and the late-1950s end of my research study period there was episodic, but increasing, concern published in the newspapers that both atomic and hydrogen bomb blasts were changing climate at a variety of scales. Initially, these concerns were dismissed as either the usual fare of a scapegoat-searching public misguided by apprehension that climate was changing or, within the prevailing restrictive Cold War setting, communist sympathising scare-mongers (including, it was asserted, Robert Oppenheimer and his five compatriots who wanted 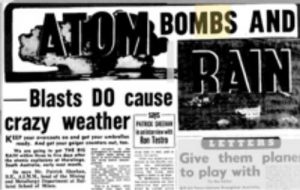 to ban the H-bomb). Blame was also laid on individuals who ‘lacked sufficient vision’ to realise the transformation that nuclear power could have in reshaping the Earth’s surface and its climate. Gradually, scientists concerned with the damaging effects of sea-level rise from polar ice-melt dampened the much-vaunted belief that the strategic use of nuclear explosions could free Antarctica and Greenland of its ice to start a bonanza of mining or even agriculture. From March 1952 increasing scientific validation of concerns that atmospheric testing gained momentum, initially from Australia’s CSIRO and especially with formal investigation by the United Nations World Meteorological Organisation in 1954. Thereafter, concern became more widespread especially with nuclear testing moving ‘closer to home’ around and eventually in Australia (in the Monte Bello islands and especially at Maralinga, both from 1956).

Climate Change Due to Changing Proportions of Atmospheric Gases

After the 1950s, two major areas of public concern over possible causes of global climate change emerged in the newspapers. The first, mainly in the 1970s, was reminiscent of then recent-findings on the cataclysm supposed to have ended the reign of the dinosaurs. It related to the possibility of a reduction in global atmospheric temperatures after the creation of massive dust plumes that would blanket incoming solar radiation – this time from a future nuclear war. Arguably a refinement of the earlier concern with nuclear explosions noted above, the relatively short-lived ‘nuclear winter’ debate received no press coverage during my study period, so I will move on.

The second issue concerns Global Warming resulting from an enhancement of the natural greenhouse effect without which much of solar energy dependent life on Earth could not exist. The modern terms ‘greenhouse effect’, ‘enhanced greenhouse effect’ and ‘global warming’ were not used in the press during my study period – but the basic concept was understood from about the late 1860s. The notion that some atmospheric trace gases (particularly water vapour and carbon dioxide) had remarkable thermal properties to both trap and re-radiate infrared heat was widely publicised in regular Science columns from the early 1870s, especially through the prolific work on atmospheric composition by British chemist John Tyndall. There followed considerable scientific refinement of the concept that these gases could influence global temperatures and its post-diction to explain the geological past, especially in opposition to Scottish geologist James Croll’s explanations of Ice Ages. This work was carried out by the Swedish chemist and physicist Svante Arrhenius from 1896 and the American geologist Thomas Chamberlin particularly in 1897 and 1899. Arrhenius was widely quoted in 1906 on his theory that the Tertiary period’s climate could be explained by a higher concentration of atmospheric carbon dioxide. Particularly between 1906 and 1917 and thereafter up to 1945 (including with the announcement of Arrhenius’ death in 1927), the ‘atmospheric gas’ theory was regularly quoted as the conventional wisdom on the cause of past climate change. In 1915 it was portrayed as vying with the less-supported theory that past climate change might also have been caused by massive volcanic eruptions (in a concept that links it to later work on nuclear winter), whereby volcanic ash could block out incoming solar radiation. Soot from industrial pollution, particularly coal dust, was occasionally portrayed (such as in 1883) as a threat that would similarly decrease global temperatures. More often, however, industrial pollution from coal combustion was portrayed as adding carbon dioxide to the atmosphere and was consequently seen as a threat to raising temperatures (such as in the widely published, syndicated 1910 article ‘How the Burning of Coal Vitiates the Atmosphere’). Although granted only a couple of lines of summary in the newspapers, Australian physicist Thomas Steel’s consideration of ‘Çarbon Dioxide and Geological Climate’ in his 1907 Presidential address to the New South Wales Linnean Society (Steel 1907) was one of Australasia’s finest early expositions of what we would portray today as an explanation of global warming. Nevertheless, in part because anthropogenic carbon dioxide and indeed atmospheric carbon dioxide in general was seen as so insignificant compared to natural carbon stores, little sustained alarm was raised about the prospect of catastrophic climate change from future Global Warming. More importantly, there was still no incontrovertible evidence of global climate change. In the scientific literature through the 1940s and 1950s, the role in palaeo-climatic change of astronomical forcing gained great momentum and largely dampened or superseded promotion of the work of Arrenhius and his supporters. Ironically, Serbian astrophysicist Milankovitch and his work on what today has become known as ‘Milankovitch cycles’ with its critical application to understanding climatic periodicity received very little explicit press recognition; his earlier 1920s work on unifying the Julian and Gregorian calendars gained more coverage. In the post-war era, greater attention was devoted to maritime and polar influences on climate, but the growing concern for both desertification and deforestation from the 1970s stimulated work on carbon budgets and positive climatic feedback systems and their implications for climate modelling. Fostered in part by the greater political sway and scientific legitimacy of environmentalists’ concerns, the modern era of climate change research was formalised in 1988 with the establishment by the World Meteorological Organization and the United Nations Environment Program of the Intergovernmental Panel on Climate Change. With mounting evidence of incontrovertible climate change, much of it due to anthropogenic causes, we enter an era that contrasts markedly from the one that prevailed before the late 1950s. This is a new age in which mainstream science is trying to convince sections of a still-resistant public that climate change is real and that humans are major contributors to it. In that regard the role of science, and especially of climatologists, now seems reversed. As before, however, science remains dynamic, contested and highly politicised, especially in relation to natural resource conservation and climate change action – and the media is once again playing a critical role in shaping public environmental knowledge and pressuring politicians.

Legg, S.M. 2014. ‘Debating the Climatological Role of Forests in Australia, 1827-1949: A Survey of the Popular Press’, in Beattie, J., O’Gorman, E. and Henry, M. (eds.) Climate, Science, and Colonization – Histories from Australia and New Zealand. Palgrave Studies in the History of Science and Technology, Palgrave MacMillan, New York, pp119-136.

Stephen Legg is Adjunct Senior Research Fellow in History in the School of Philosophical, Historical and International Studies at Monash University in Melbourne.

This blog post complements episode 71 and 72 of the Exploring Environmental History Podcast.