October 29, 2015 / K. Jan Oosthoek / Comments Off on Some thoughts on trees, documents and digital technology

How can digital technology unlock the secrets of an arboretum and make it available to a wide audience? That was one of the main questions of the keynote talk by Jennifer Gardner, curator of the Waite Arboretum at the University of Adelaide, opening the 9th conference of the Australian Forest History Society (AFHS).

In 1928 the arboretum was established on land that was given by Peter Waite (1834-1922), pastoralist and benefactor, to the University of Adelaide. Over time the collection of the arboretum evolved into a valuable resource for teaching, research and a bank of genetic plant and tree material. The collection has been meticulously documented and in the 1980s the handwritten system cards were transferred into a computer database. 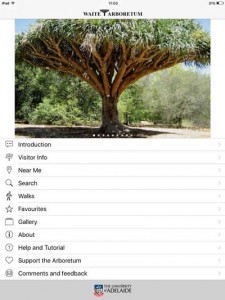 In the 1990s a map of the arboretum showing the layout and location of each individual species was created using CAD computer technology. More recently this map has been transferred into a GIS system, georeferenced and linked to the arboretum database. To make the map and all data available to a wide audience an app has been developed that allows people to interrogate the collection on their phone or tablet. The interface using a map makes it possible to investigate individual species and there are theme walks that present trees of special interest such as Mediterranean trees of trees of California. What is missing at present is a section on the history of the arboretum, including historical maps and documents. 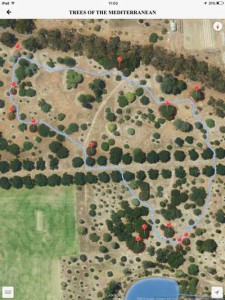 Trees of the Mediterranean Walk

Modern computing technology, the web and the ubiquity of mobile devices makes it possible to make collections such as that of the Waite Arboretum, available and accessible to a wide audience. But in the process of transferring the species growing in the arboretum into a paper catalogue, and onto a map and finally into an app new interpretations and representations of the real world arboretum have been created. It provides new ways of looking at the arboretum and its species and by doing so it creates a continuation of versions of nature and values attached to it starting with the creation of the arboretum and ending with the app. Every representation, whether it is a park, paper catalogue, digital database or visual representation on Google Maps, it reflects the historical progress of technology as well as the values and visions of the natural of each age they represent. It also provides new opportunities for environmental education, engaging the general public and connecting new generations to nature, science and history.

But by digitizing the documents of the arboretum we also risk loosing the originally handwritten sources and data in the process. As pointed out in the keynote talk at the AFHS conference, universities and other institutions are looking for cost savings and are not always prepared to pay for the preservation of original documents and sources or even the survival of arboreta. Digitization is too often seen as a way to preserve historical material but unfortunately it provides us with a false sense that historical documents have been preserved forever. How durable is digital technology? The jury is still out but if the pace of technological change is anything to go on (formats become obsolete and inaccessible) as well as the fate of all hard disks (they fail), paper is a much better bet. The oldest books and documents we have are over thousand years old and papyrus rolls are even older. This is why (environmental) historians must stay vigilant and defend the documentary paper sources, as well as real world repositories such as arboreta and botanical gardens, that enables us to tell our stories on both old fashioned paper and through modern digital media. (Not to mention the genetic, biodiversity and cultural value of arboreta and botanical gardens).