Podcast 60: Origins, entanglements and civic aims of the early forestry movement in the United States

May 26, 2014 / K. Jan Oosthoek / Comments Off on Podcast 60: Origins, entanglements and civic aims of the early forestry movement in the United States 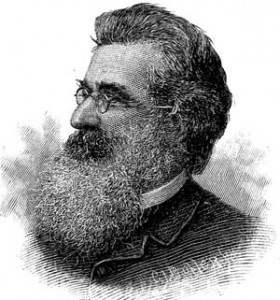 While the origins of forestry in the United States have been the topic of sustained interest amongst environmental and forest historians, the history of the early forestry movement itself remains neglected. This is partly due to the manner in which later professional foresters often air brushed their “forest sentimentalist” predecessors out of the story and forest historians focused their narratives on of the development of forestry science and the modern Forestry Service, isolating that institution’s history from the broader social movement in which it originated.  This broader movement advocated forestry not just as a means to produce timber for an increasingly industrialized nation but also as a vehicle of social reform and religious awakening. One of the pioneers in this movement — and a key advocate of Arbor Day, village improvement and forestry education — was Connecticut educator Birdsey G. Northrop. This episode of the podcast explores the alternative origins, entanglements and civic orientation of early forestry in the US through Northrop’s forgotten tour of Europe’s Forestry Schools in the summer of 1877. This journey and the impact it had on American forestry is a theme studied by the guest on this episode of the podcast, Jay Bolthouse, a PhD candidate in the Graduate School of Frontier Sciences at the University of Tokyo.

Jan Oosthoek, “Worlds Apart? The Scottish Forestry Tradition and the Development of Forestry in India“,Journal of Irish and Scottish Studies, 3 (2010) 1, 69-82