Podcast 56: The power of the wild 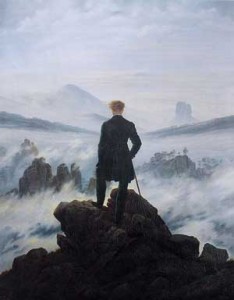 Wanderer above the sea of fog
contemplating the power of
nature. Separate or part of the
wild? Painting by Caspar David
Friedrich (1774–1840).
Source: Wikipedia.

The power of the wild is an idea that has been important in western thought as a place of refuge or separation where we can feel the power of nature. It is a place where humans are not in control and their power is limited.

This was one of the questions considered at a workshop held at Wicken Fen in Cambridgeshire, England in April 2013. The participants of the workshop also examined if a nature reserve like Wicken Fen can be made wild again, a process called re-wilding. In episode 53 of this podcast series Dolly Jørgensen argued that no re-wilding is needed but that the wild is all around us, even in urban settings.

In this episode of the podcast Paul Warde, reader in history at the University of East Anglia, argues that the experience of the wild is hard to find in an urban environment, even an urban park or in a nature reserve in densely populated England. The question is then if rewilding of an heavily dominated human landscape like Wicken Fen is possible and can be returned to a “wild state”. This desire of rewilding Wicken Fen also led to the question whether such a rewilded area would be truly wild.

Paul Warde, The Anthropocene: finding ourselves back in the wilderness. Reflections on the workshop on Re-wilding and Wild Desires at Wicken, 18-19 April 2013

Podcast 57: Events in the collective environmental memory of humanity