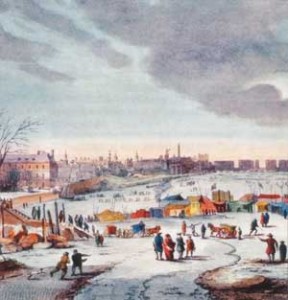 Frost Fair on the River Thames near
the Temple Stairs in 1683-84.
Engraving after a drawing by Jan Wijck.
Source: Wikimedia Commons

For many historical climatologists cold, wet and stormy weather worsened life for most European people and harmed the economy during the early modern period. Warmth on the other hand is generally regarded as a beneficial thing but too much of it is also harmful. This all seems to make sense if one ignores the Dutch economic miracle which transformed a small piece of land on the edge of Europe into the first modern economy just as the Little Ice Age entered its coldest phase. How is this possible in the face of climatic stress?

This is one of that questions that Dagomar Degroot, a PhD Candidate in environmental history at York University in Toronto, Canada, addresses on this episode of the podcast. His research explores the issue of how the changing climate of the Little Ice Age influenced the cultural, military and economic histories of the Dutch Republic during the early modern period. In addition, Dagomar will discuss the pitfalls of determinism and indeterminism in historical climatology, the sources available to historian’s researching climate and the relevance of historical climate research for present day debates about global warming and climate change. Finally, he will talk about the importance of blogging for the historical profession as a tool to communicate research outcomes to a wider audience.